Again, a blog post written a day late, but I was feeling rather rubbish yesterday, so I couldn’t really bring myself to type up any posts. I did do some uni work so congratulate me for that though (thanks!).

Anyway, in true hot-mess Ellie fashion, I woke up at half seven with good intentions and promptly went back to sleep until midday (this is where the rubbish feeling came from, I am sure of it). So once again I skipped breakie (well I had a coffee or two).

Also, my soy milk went bad! I put it in a coffee and it started doing that thing where it separates, so I binned the lot. This was unfortunate but I’m not a fan of soy milk, so I wasn’t too distraught.

I did so well yesterday and actually ate at breakfast time. But here we are today, it’s midday and I’m not out of bed. No time for breakfast, but I’ll shower and make some lunch.

I still had a lot of rice leftover, so I decided to make a fried rice. I couldn’t find any sesame oil in the house so I figured maybe walnut oil would do the trick. I fried some onions and garlic then added the rice and sweetcorn. Then I doused it soy sauce, some rice wine vinegar and some maple syrup. Probably shoved some random spices in there too, but I can’t remember. At this point, it was still looking kind of dry, and usually I’d add an egg to bind it all together. I didn’t have anything that I could use in place of an egg but I combated the dryness with some coconut milk.

I also had my left over cucumber from yesterday, which was even nicer because it had had more time to soak in the vinegar and soy sauce. 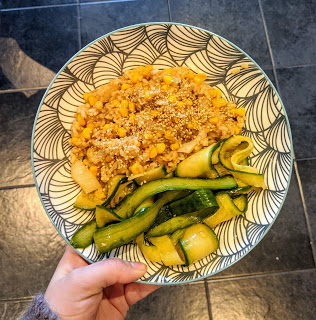 It was pretty much your bog standard fried rice, though without the egg to bind it all together I found it a little harder to eat with chopsticks than usual. It’s fine, I just brought the bowl to my face and shoveled it in.
Dinner – Mindful Chef Thai Yellow Tofu Curry with Pak Choi
During the first lockdown, my aunt started ordering some weekly meals from Mindful Chef (one of those companies that sends you recipes and all the ingredients you need to cook them), to keep things interesting and save us the chore of figuring out what to eat. She started the subscription back up again and choose a few vegan meals, which is incredibly useful.
We’ve actually been opting for some of the vegan options for quite a while now, as we found some of them better than the recipes involving meat.
Anyway, this is huuuge relief for me, as it means I can just follow a pre-decided recipe and skip the shops. This saves me from having to think about my dinner for two nights a week.
So today we opted for the Thai yellow tofu curry. I set to work following the instructions and not thinking which was quite helpful because I was still in a dazed mood from the morning. I find cooking helps a lot with that, especially when you don’t even have to think too much. 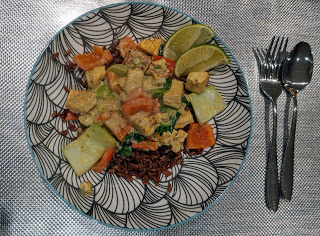 The curry was great! I felt like I hadn’t quite been given enough rice, but apart from that it was a yummy meal. It was nice to not have to figure out what I was doing because every step was written out for me. The tofu was great, much more similar to what my family buy, rather than that horrible stuff I bought the other day, so I’ll be looking to buy some more of that to use in future meals.
The only problem was that I was still a little bit peckish afterwards, so I filled up on some yoghurt and fruit. I have been finding that I am not feeling full for as long as usual, which a friend has suggested may be because I’m not eating enough protein, so I’ll be doing some research tomorrow and hopefully figuring out some way to feel fuller.
Day Five Summary
The Mindful Chef meal has helped my motivation with this massively, I was beginning to feel like I was relying on hastily made meals that I throw together at the last minute in a panic. I do need to try and plan this out a little better, as I have been saying for days, but I’ve got a lot of assessments at the moment which are taking centre stage.
Also I need to work on the hunger thing, which I’ll be researching in bed tonight. Maybe actually having a decent breakfast will help too, so I’m planning on porridge tomorrow.